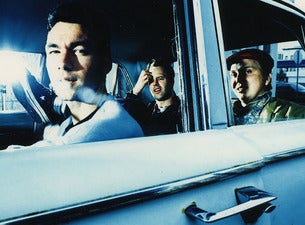 Formed in 1986, San Francisco trio Jawbreaker were a crucial link in punk's evolution from the raw aggression of ‘80s hardcore to the heart-on-sleeve yearning of ‘90s pop-punk and emo. On their 1990 debut, ‘Unfun,' the band had already mastered the blitzkrieged drumbeats and upbeat, motor-mouthed melodies that defined so much California punk of the day, but the uniquely gravelly vocals of singer/guitarist Blake Schwarzenbach brought a more palpable sense of ache to the fore. That quality came into greater focus on 1992's tightly coiled ‘Bivouac,' where tracks like "Chesterfield King" and "You Don't Know" presented Jawbreaker as natural heirs to the hoarse-throat songcraft of The Clash and Hüsker Dü. (Though all that shouting came at a considerable physical cost — while touring the album, Schwarzenbach lost his voice due to a polyp that had to be surgically removed.) After opening a handful of shows for Nirvana on the ‘In Utero' tour in the fall of 1993, Jawbreaker dropped their stone-cold masterpiece, ‘24 Hour Revenge Therapy,' a collection of poetic, hardscrabble anthems — like the mosh-pit-rousing "Boxcar" and frantic "Do You Still Hate Me?" — that made them the most beloved independent punk band in America. But with their Bay Area peers Green Day becoming the most popular mainstream punk band in America at the time, Jawbreaker made the inevitable (and, in underground circles, extremely controversial) decision to follow them into the big leagues, signing a million-dollar deal with Nirvana benefactors DGC. Alas, the album that resulted — 1995's streamlined ‘Dear You' — proved not to be the next ‘Dookie,' and the combination of deflated expectations, tour-induced exhaustion, and simmering acrimony between Schwarzenbach and bassist Chris Bauermeister brought the band to an unceremonious end a year later. However, in absentia, Jawbreaker's pioneering style of emotional punk became a defining feature of the 21st-century rock landscape, thanks to successors like Jimmy Eat World and famous fans like Dave Grohl. And while Jawbreaker seemed destined to forever languish alongside The Smiths and Talking Heads on the list of Bands That Will Never Get Back Together, the filming of a documentary, ‘Don't Break Down: A Film About Jawbreaker,' brought the band members into the same room together for the first time in over a decade — and, in doing so, planted the seeds for their triumphant return to the stage at Chicago's Riot Fest in September 2017, and a series of sold-out U.S. dates throughout 2018.