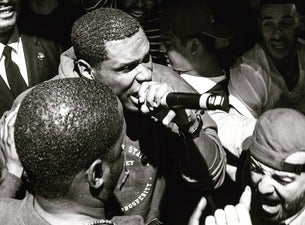 Forward-thinking rapper and producer Jay Electronica has become one of the most buzzed about artists in hip hop thanks to his experimental tracks and razor-sharp lyrical delivery. His 2007 debut mixtape Act I: The Eternal Sunshine (The Pledge) perfectly encapsulates his creative approach -- it contained no drum beats and was comprised entirely of sampled film dialog, Electronica's effortlessly confident flow, and music from Jon Brion's soundtrack to Eternal Sunshine of the Spotless Mind. Since then he has continued to keep fans on their toes at his live concerts, delivering dynamic performances that are both bounce-worthy and thought-provoking. Whether he's inviting the audience onstage during "Exhibit C" or delivering cuts from his 2014 debut album Act II: Patents of Nobility (The Turn), Electronica is an entirely original artist who always treats ticket buyers to an unforgettable show.

New Orleans-born, London-based Jay Electronica, aka Timothy Elpadaro Thedford, started rapping in his teens after hearing his nephew rhyme. At age 19 he left home to pursue his music dreams, performing shows in various US cities before landing in Detroit. There, he linked up with producer J Dilla, who allowed Electronica to rap over his beats on his early demos. In 2007 Electronica released the mixtape Act I: The Eternal Sunshine (The Pledge), an auspicious debut that Vice magazine hailed as a "timeless classic". His rise continued with the release of "Exhibit A" and "Exhibit C" in 2009, and in the early '10s he appeared on tracks by Big Sean, Common, and Mac Miller. In 2014 Electronica released his highly anticipated debut album Act II: Patents of Nobility (The Turn), a stellar collection of tracks that has fans eager to see him flex his lyrical muscles on tour.