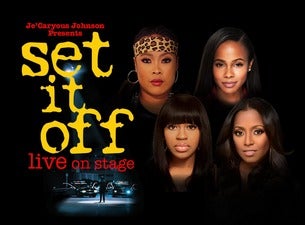 Writer/Director/Producer Je’Caryous Johnson who brought you the sold out hit play, “Married But Single” and the hilarious romantic comedy, “Two Can Play That Game” is back with another one – Je’Caryous Johnson presents SET IT OFF based on the hit iconic movie by the same name. Fans will get to relive the ride that made them love SET IT OFF the movie, but this time around they will experience it LIVE ON STAGE.
The hit heist, cult classic movie you love is now a stage play and coming to your city. The same iconic characters – Frankie, Tisean (T.T.), Stoney and Cleo are back bringing the same action packed, adrenaline filled robbery scenes and emotionally charged antics against an equally exciting music soundtrack that will have you on the edge of your seat. Multi–platinum selling rapper DA BRAT will be starring as Cleopatra “CLEO” Sims, the role originally played by Queen Latifah in the movie. Fans will recall SET IT OFF centers on four childhood friends who spent a lifetime struggling to move away from the mean streets of their neighborhood. The system stole their dreams and now the four are determined to steal them back. With their world in turmoil and their backs against the wall, they decide to seek their fortune - literally. Targeting the banks of Los Angeles, Cleo, Stony, Tisean (T.T.) and Frankie rob the city's most vulnerable financial institutions. Flush with cash, they discover that mo’ money equals mo’ problems.