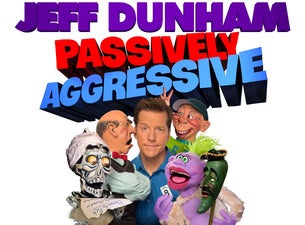 There may be nothing Jeff Dunham won't say, at least not when he's attached to one of his puppet companions. Dunham's wildly original combination of ventriloquism and no-holds-barred comedy has made him one of America's most unpredictable and most popular entertainers.

Before Dunham became one of the world's highest-grossing performers, he had more humble origins in Dallas, Texas. After he received a Mortimer Snerd dummy as a Christmas present at the age of 8, ventriloquism became the youngster's obsession, and Dunham spent countless hours studying the secrets of masters like his hero Edgar Bergen. By the time Dunham was in high school, he and his dummies were local celebrities. He continued to hone his act in clubs throughout the Southwest before taking it to Los Angeles, where his doggedness eventually led to an appearance on The Tonight Show Starring Johnny Carson in 1990.

Though Dunham's exposure on the late-night show led to roles on commercials and headliner spots, his wider breakthrough arrived in the early 2000s. Millions discovered Dunham's particular brand of lunacy through his first solo special on Comedy Central and his first DVD, Jeff Dunham: Arguing With Myself.

Clips featuring Dunham's most controversial character — Achmed the Dead Terrorist — were among YouTube's most popular videos on the new platform. Regular Dunham costars like the ever-cranky Walter, his hyperactive, purple-skinned "woozle" Peanut, the redneck Bubba J, and the sombrero-wearing pal named José Jalapeño on a Stick all became stars in their own right, too.

Launched in 2007, Dunham's Spark of Insanity tour sold more tickets than any other comedy tour ever, earning it a place in the Guinness Book of World Records. His next tours — Identity Crisis, Controlled Chaos, Disorderly Conduct, Not Playing With a Full Deck, and Perfectly Unbalanced — would entertain millions more thanks to Dunham's reliably provocative yet widely appealing brand of humor.

In 2017, he starred in his first Netflix special — Jeff Dunham: Relative Disaster, filmed in Dublin, Ireland — and introduce audiences to Passively Aggressive, the show that's already sent him and his friends all over the globe. Now Dunham is back in the U.S. and Canada to present a trademark brand of comedy that's goofy, nutty, and anything but politically correct.