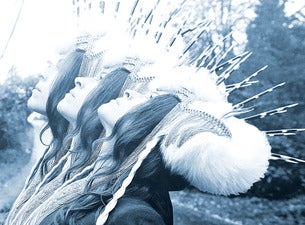 It's hard to put a label on singer-songwriter Jesca Hoop. Her music draws from folk, rock and electronica, but she manages to transmute these familiar genres into an avant-pop sound that's all her own. Hoop's songs range from experimental art rock romps to heartbreaking acoustic ballads, and her live performances perfectly showcase her many facets, taking audiences on an intimate and dynamic journey through her eclectic catalog. In concert she favors a stripped-down set-up, usually taking the stage solo with just a guitar and her gorgeous, acrobatic voice, but she also occasionally teams up with other musicians (in 2015 she toured as a duo with fellow songwriter Blake Mills). Her singular sound has made admirers of everyone from Tom Waits to Peter Gabriel, and her evocative performances continue to win over new fans every time she hits the road on tour.

Santa Rosa, CA-born Jesca Hoop was raised Mormon and grew up singing hymns in multi-part harmony with her family. She left the church at age 16 and moved off the grid, spending time in rural Northern California and Wyoming before finding work as a wilderness survival guide in Arizona. Eventually Hoop settled in her native California and began working for legendary singer-songwriter Tom Waits, who recognized her unique talent and connected her to his music publisher. Before long Hoop's song "Seed of Wonder" was a local radio hit, leading to a deal with Columbia Records and her 2007 debut album Kismet. The following year she moved to the UK and began work on her sophomore album, 2009's hip hop-influenced Hunting My Dress. After opening for Peter Gabriel on his 2011 New Blood Tour, Hoop returned to the states and released her third album, 2012's critically acclaimed The House That Jack Built. In 2016 Hoop teamed up with Iron & Wine's Sam Beam for Love Letter for Fire, an album of duets that will draw the duo out for a highly anticipated tour.