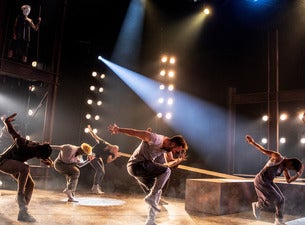 Jesus Christ Superstar originated as a high-concept rock opera with music by Andrew Lloyd Webber and lyrics by Tim Rice in 1970 and sold more than 7 million copies by 1983. Their account of Jesus' last week of life made its Broadway debut as a musical in 1971, dazzling audiences with its stirringly maximal music and minimal dialogue. Two film adaptations followed, in 1973 and 1999, and NBC aired a live concert version, starring John Legend as Jesus, on April 1 (Easter Sunday), 2018.

"This is not your grandmother's Superstar," Catey Sullivan wrote in the Chicago Sun-Times when Timothy Sheader directed the musical in Chicago in 2018. "Drew McOnie's choreography has the explosive feel of barely contained ecstasy, filled with flailing movements that evoke old time tent revivals where snake handlers spoke in tongues and miraculously cured the sick."

The 50th Anniversary Tour production of Jesus Christ Superstar stars actor-singer-songwriter Aaron La Vigne as Jesus, actor-poet James Delisco Beeks as Judas and Jenna Rubaii as Mary Magdalene. You'll shout hallelujah! during the onstage rock band's renditions of "This Jesus Must Die," "I Don't Know How to Love Him" and "Superstar." And when one of the Pharisees sings, "One thing I'll say for him, Jesus is cool," you will take him at his word.