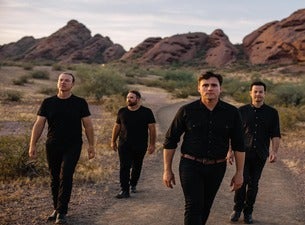 In 2013, Jimmy Eat World celebrated  20 years of independently released records with Damage, their critically-acclaimed eighth studio album. At their 2013 live concerts, the band delivered a blast of non-stop energy and enthusiasm, delighting ticket buyers with heavy guitar riffs, boisterously precise drum solos, and three-part vocal harmonies anchored by the familiar croon of frontman Jim Adkins. 2013's Damage saw the band transition from teen-angst rock towards a more sophisticated sound, with lyrical content taking on a markedly more mature tone on singles like the album's title track and "I Will Steal You Back."

Jimmy Eat World started in 1993 as a punk trio formed by childhood friends Jim Adkins and Zach Lind. After years of hard work in the studio and on the road, the band settled on a poppier sound, hitting the spotlight in 2001 with breakthrough album Bleed American. The album included several successful singles including "The Middle,” which reached No. 5 on the Billboard Hot 100 and became an MTV staple. After extensive touring in support of the album, the band returned to the studio for 2004's Futures, which peaked at No. 6 and earned the band another No. 1 single with "Pain." Chase This Light in 2007 and Invented in 2010 would achieve similar success, cementing the band's role as one of the most successful indie acts in the business. On tour in 2013, Jimmy Eat World proved that they've stood the test of time, displaying a level of dedication and intensity that has fans eagerly awaiting their 2014 live dates.