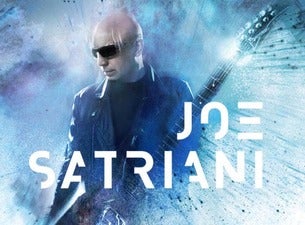 Joe Satriani’s virtuoso guitar playing is more than just flawless technique and blistering speed -- he also forms an emotional connection with fans that is beyond words. His genuine love of riff-based rock ensures that audiences are in for a sonic thrill ride at his live shows, where his nimble fingers and finely tuned ear bring his ballads to life. While “Satch” (as friends and fans refer to him) turns melodies inside out and shreds up a storm, his cast of astounding supporting musicians keeps the grooves solidly rocking throughout six-string stunners like “Surfing with the Alien”, “Satch Boogie”, and “Flying in a Blue Dream”.  Ticket buyers are in for a transcendent instrumental experience that can't be beat, featuring a brilliant musician in impeccable form.

The highest-selling instrumental rock guitarist of all time, Joe Satriani was born in Westbury, NY in 1956. Before he gained fame, Satch made a living teaching some of the most influential guitarists of the ‘80s, including Kirk Hammett (Metallica), Steve Vai (David Lee Roth), and Larry LaLonde (Primus). His solo career took off with the hits “Always with Me, Always with You” and “Satch Boogie” off his 1987 album Surfing with the Alien. He kept his hot streak alive with his next two albums Flying in a Blue Dream (1988) and The Extremist (1992), which both went gold. In 1996 Satriani started the G3 Tour with friends Steve Vai and Eric Johnson to bring instrumental guitar music to the masses. In 2008 Satch joined forces with former Van Halen members Sammy Hagar (vocals), Michael Anthony (bass), and Red Hot Chili Peppers drummer Chad Smith to create the supergroup Chickenfoot. While those projects keep him crazy busy, Satriani still continues to tour and record as a solo artist, releasing Unstoppable Momentum in 2013.