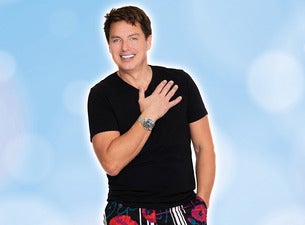 "Anything Goes" at a John Barrowman concert.

Exclusive to Melbourne, spend an intimate evening of songs, stories and laughter with the incomparable John Barrowman. From West End leading man to time-travelling hero, John is the epitome of entertainment.

Famous for his portrayal as the charming Captain Jack Harkness in BBC’s Doctor Who, John’s character was so popular he was given his own hugely successful spin-off, Torchwood, and starred as Malcolm Merlyn in five seasons of Arrow.

When it comes to the stage, John’s musical theatre career has seen him star in many West End shows, including Anything Goes, Miss Saigon, The Phantom Of The Opera and La Cage Aux Folles.

With boundless energy and an incredible voice to match, John’s charismatic stage presence will leave you breathless, with a smile as big as John’s on your face.

From Sting to Sondheim, Cole Porter to Barry Manilow, Big Band to Motown, join us for a raucous repertoire of beloved classics (with a few surprises in between).