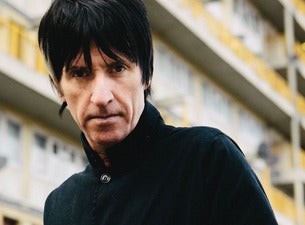 Johnny Marr found worldwide fame in the ‘80s with cult British band The Smiths. One of Britain's most famous guitarists, Marr has played in a number of successful bands such as Modest Mouse and  The Cribs as well as becoming a renowned session musician.

After playing in a few bands and performing the odd solo gig in his mid-teens, Marr formed The Smiths with a poet and singer called Morrissey at the age of 18. They wrote the songs together and the band that formed in 1982 went on to become one of the truly iconic British acts of the ‘80s. Hit albums such as the self-titled The Smiths in 1984, Meat is Murder in 1985, The Queen is Dead in 1986 and finally Strangeways - Here We Come in 1987 became albums that helped define the era. Their music helped bring the guitar sound back to the mainstream, and their songs proudly stood as a musical backlash against the synth-pop chart music of the time. In 1987, creative differences led to the band splitting up, but thankfully their five-year run of huge success and critically acclaimed albums had already established Johnny Marr as one of the most influential songwriters and performers of the decade.

Marr stayed incredibly busy after The Smiths' time was up, playing sessions with the likes of Sir Paul McCartney and both recording and touring with established bands such as The Pretenders and The The. Essentially, from 1987 until 2002 Johnny Marr worked with everyone who was anyone in the UK music industry. Collaborations included working with Billy Bragg, Talking Heads, The Pet Shop Boys, Kirsty MacColl and Black Grape. He also made a special one-off appearance playing with Oasis in 2001, as well as working with them on some album tracks in the studio.

In more recent years he has toured and played with Modest Mouse extensively, including supporting R.E.M. on their US tour. Johnny is also a member of occasional super-group Seven Worlds Collide, which is made up from members of Radiohead, Crowded House and Pearl Jam. Together they have recorded a number of tracks to raise money for Oxfam. He also plays with The Healers and  The Cribs, touring whenever he can. His solo album, The Messenger, was released through Warner Brothers in 2013 and Marr continues to be one of the very best live and studio artists.