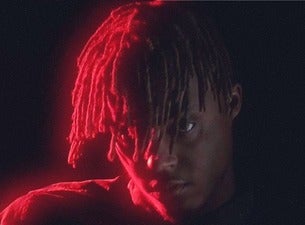 Within three years after uploading his first track to SoundCloud, Juice WRLD had become one of the most successful rappers on the planet, and his rise shows no sign of slowing. His breakout single, "Lucid Dreams," has three-quarters of a billion Spotify streams. The Chicago rapper sets himself apart with a distinctly emo form of rap, tackling themes of longing and heartbreak. It's an unconventional approach in mainstream rap, but it's vaulted Juice WRLD big-time. His debut LP, ‘Goodbye & Good Riddance,' came out on Interscope in May 2018 and peaked at No. 4 on the Billboard 200. He then collaborated with Future on the ‘Wrld on Drugs' mixtape, which ascended even higher on the chart to No. 2. On stage, he channels his songs' emotions with an endearingly off-key delivery over melodious production, as seen on tour with Nicki Minaj, at Red Rocks Amphitheater in Colorado on Halloween, or on the main stage of the Rolling Loud festival in Los Angeles. Juice WRLD has announced plans for the ‘Evil Twins' mixtape with Ski Mask The Slump God and a 30-city tour to accompany it and his second LP, ‘A Death Race for Love,' which dropped in March 2019.

Born in Chicago as Jared Higgins in 1998, but growing up in the suburb of Homewood, Illinois, Juice WRLD was raised by a single mother who kept him away from hip-hop. Higgins started taking piano lessons at age four, and soon moved to guitar and drums, which spawned his love for rock ‘n' roll. He started rapping in high school and initially took the moniker Juice Kidd, a nod to 2Pac's character in the movie ‘Juice.' His first SoundCloud uploads took off, including a million streams of "Lucid Dreams," without any promotion. He soon signed with Lil Bibby's Grade A Productions to release his first EP. Soon after came a $3 million deal with Interscope, who released his first two albums, including charting singles "Armed & Dangerous," "Lean Wit Me," "Wasted," and "Lucid Dreams." In addition to his own music charting all over the globe, Juice WRLD has been featured on tracks by rapper Lil Yachty and producer Benny Blanco, and he contributed to the soundtrack for ‘Spider-man, Into the Spider-verse.'