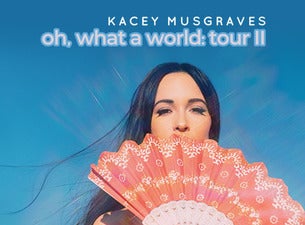 It's been years since Musgraves lived in Golden, Texas, her childhood home of roughly 600 people, but the whirlwind that followed Same Trailer Different Park — a debut album that topped the country charts, took home two Grammy Awards (including Country Album of the Year) and sent Musgraves halfway across the world on tour — made her think hard about where she came from. Pageant Material, her second album, pays tribute to those Bible Belt roots, shining a light on a hometown girl who's grown up, expanded her worldview and done a lot of livin' since skipping town. It's an album about where she's from and where she's going, full of autobiographical details that are humorous one minute and heartwarming the next.

Appropriately, all thirteen of the album's songs were co-written by Musgraves, who teamed up with the same group of songwriters who'd helped bring Same Trailer Different Park to life several years earlier. Those names may be familiar — Brandy Clark, Luke Laird, Shane McAnally and Josh Osborne, along with additions like Natalie Hemby and Ashley Arrison.