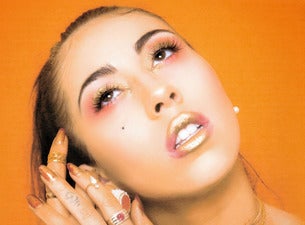 On stage, Kali Uchis brims with the sultriness of a vintage pinup and channels a sullen soulfulness in the same vein as Little Ann. These qualities have caught the attention of Lana Del Rey, with whom the Los Angeles-based singer toured extensively in 2017, just months before releasing her star-studded 2018 LP debut, Isolation.

Influenced by the sounds and styles of 1960s-era soul, R&B, and doo-wop, Kali Uchis' languid glamour and jazzy mystique instantly captivate. She often performs with a crew of backup female singers and dancers that evoke the golden days of Motown — à la Diana Ross & the Supremes and The Marvelettes — but with a provocative R&B flair. Kali Uchis kicks off her 2019 tour in April along with British pop crooner Jorja Smith.

Born Karly-Marina Loaiza in 1994 to Colombian parents, Kali Uchis was raised between Pereira, Colombia, and the suburbs of Virginia. She learned to play the piano and saxophone at a young age, and by high school she'd joined jazz band.

The aspiring star often ditched class to work on her creative endeavors and began stitching up what would be her first release — 2012's Drunken Babble — as Kali Uchis, a moniker her father gave her. Her sizzling approach to soul music with hip-hop flair captured Snoop Dogg's attention, and the two collaborated on his track "The Edge" off his 2014 mixtape release.

In 2015, Kali Uchis released her EP Por Vida, a sultry, bilingual affair that featured production work from the likes of Diplo and Tyler, the Creator. "Sycamore Tree" was featured in Season 6 of the TV show American Horror Story. With 2018's Isolation, Kali Uchis achieved wider appeal, thanks to collabs from stars like Bootsy Collins, Reykon, and Steve Lacy. Along the way, the Colombian artist earned a Latin Grammy nomination in 2017 for Record of the Year for her collaboration with Juanes on "El Ratico."