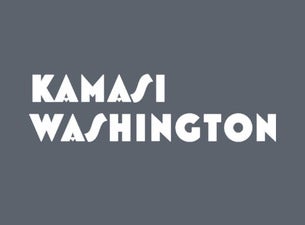 Tenor sax virtuoso Kamasi Washington is bringing jazz to a new generation of fans with his powerful blend of avant-garde experimentation and hip hop savvy. Washington's cachet in the rap world is nothing newóhe's played sax on tour with Snoop Dogg, Lauren Hill, and Raphael Saadiqóbut his cred reached new heights in 2015 thanks to his prodigious playing on Kendrick Lamar's critical masterstroke To Pimp a Butterfly. Washington followed up later in the year with his own acclaimed album The Epic, and he's been killing it on tour ever since with extended sets that showcase his masterful musicianship and impressive powers as a bandleader. In concert he's a magnetic figure, taking the stage in a traditional African dashiki and conjuring amazing performances out of his band, which includes two drummers, an array of horn players, keys, bass, and backup singers. It's an insanely talented group, but the star of the show is always Washington, who serves up his funky sax wizardry with effortless style and balloon lungs that keep fans grooving until the very last lick.
BACKGROUND SNAPSHOT:

Inglewood-born Kamasi Washington picked up his father's saxophone at age 13 and continued honing his blowing skills as a music student at LA's esteemed Alexander Hamilton High School. After winning the John Coltrane Music Competition in 1999 he enrolled in UCLA's Ethnomusicology program, where he studied with jazz bigwigs like Kenny Burrell and Billy Higgins. His academic pursuits gave way to a successful career as a session and touring player in the early '00s, including gigs with jazz and hip hop legends like Herbie Hancock, Wayne Shorter, and Snoop Dogg. Washington self-released a handful of albums in the late '00s including The Proclamation (2007) and Light of the World (2008), and in 2015 he rose to national attention after appearing on Kendrick Lamar's much-lauded 2015 LP To Pimp a Butterfly. Washington's rise continued later that year with his album The Epic, which earned a Best New Music distinction from Pitchfork and led to extensive touring that proved his performance chops are just as impressive as his skills as a blower, composer, and arranger.