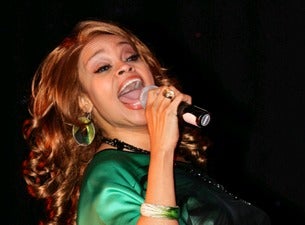 Karen Clark-Sheard helped bring gospel into the mainstream in the '80s as a member of The Clark Sisters, and today she remains one of the genre's leading ladies thanks to her supremely soulful voice, incredible range, and uplifting performances. Since going solo in 1997 with the aptly titled Finally Karen, Clark-Sheard has cemented her status as a gospel legend with six consecutive Top 5 albums and several Grammys. And while she's been blessed with hit records and prestigious awards, nothing has been as rewarding for Clark-Sheard as her faith. Passion and devotion emanate from this gospel diva every time she performs, and her inspiring spirituals always leave ticket buyers feeling inspired. Whether she's raising the roof with funky gospel jams like "Prayed Up" or bringing down the house with her R&B-inspired hit "Sunday A.M.", Clark-Sheard always does it with style, grace, and soul to spare.

Karen Clark-Sheard was born in Detroit to a pastor father and a choir director mother, and she grew up performing in church with her sisters. By the mid-'70s The Clark Sisters were a rising star on the gospel scene, and in the early '80s the group was a fixture on the charts thanks to acclaimed albums like You Brought the Sunshine (1981) and Sincerely (1982). The Clark Sisters continued to enjoy success well into the '90s, and in 1997 Clark-Sheard released her debut album Finally Karen. The record earned a Grammy nomination and was a Top 5 smash on the Gospel charts—an impressive feat she would repeat with her next five albums. Clark-Sheard won a Grammy for Best Gospel Performance in 2010 for "Wait on the Lord", and she was nominated once again in 2014 for "Sunday A.M.". Her success continued in 2015 with the live album Destined to Win, a critical masterstroke that showcased her prodigious gifts as a performer and left fans eager to see her God-given talents on tour.