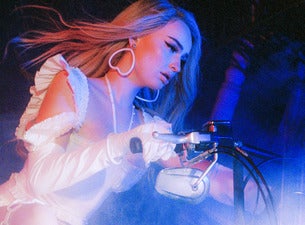 With a hot mix of sauce, sass, synths and Spears-esque charm, Kim Petras is dance-pop's most daring darling. The German-born artist took her time growing her music career, but by 2017 she was taking the pop world by storm. She has given notable performances at LA Pride and the Billboard Hot 100 Music Festival and toured the U.S. extensively. In 2019, she set out on her debut headlining tour, The Broken Tour, followed by The Clarity Tour in support of her hit debut album, Clarity.

Kim Petras was born to be in the spotlight, though her trajectory there would be quite unorthodox. The singer and songwriter was born Tim Petras in Cologne, Germany, but at a young age was already identifying as a girl. By age 16, she became one of the youngest people to receive female hormone treatments and go through a full gender transition. This garnered plenty of publicity, TV appearances and modeling gigs, but her work as a musician would soon surpass all of that. Her music career officially began with her 2008 debut single, "Fade Away." It would take nearly a decade for Petras to really find her voice, and she certainly did with 2017's "I Don't Want It at All," a saucy dance-pop gem coproduced by hitmakers like Cirkut and Dr. Luke. From this point on, she was one of pop's go-to collaborators. Charli XCX recruited Petras for the 2017 single "Unlock It" from her mixtape Pop 2. The next year, she worked with Cheat Codes for the song "Feeling of Falling," which landed at No. 23 on the Billboard Hot Dance/Electronic Songs chart. That same year, she dropped the EP Turn Off the Light, Vol. 1, a Halloween-inspired set featuring a guest appearance from the Mistress of the Dark herself, Elvira. In 2019, she teamed up with dance-pop producer Sophie for "1,2,3 Dayz Up," and joined forces again with Charli XCX on the single "Click." But that was nothing compared to Petras' biggest release to date: Her debut album, Clarity, which landed at No. 7 on the Billboard US Heatseekers Albums chart. She quickly followed that with album number two, Turn Off the Light, a continuation of her 2018 EP of the same name.