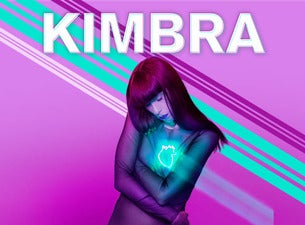 Aussie songstress Kimbra first rose to fame thanks to her collaboration on Gotye's "Somebody That I Used To Know", but lately it's her solo act that's earning attention. Her perfect mix of soulful pop, jazz, and dance music gets concertgoers tearing up the floor all night. Known for her eccentric stagewear, powerful vocal range, and expert use of looping effects, Kimbra never fails to wow with her infectious energy and phenomenal performances of originals such as "Settle Down" and "Plain Gold Ring".

Kimbra got her start in music at the age of 12 when she learned to play guitar and sang in her school choir. Influenced by Michael Jackson, Imogen Heap, and Stevie Wonder, Kimbra began experimenting with different genres and eventually arrived at her soul-tinged dance-pop sound. After winning a video contest in 2008, she attracted attention from label exec Mark Richardson who saw her immense talent and signed her later that year. She released her debut single "Settle Down" two years later, which landed a Top 40 spot on the New Zealand charts and put her on the map as a hot artist on the rise. She collaborated with Gotye on his 2011 single "Somebody That I Used To Know" -- a worldwide smash hit that topped the charts in 26 countries,  earned the duo two Grammy Awards, and launched the pair to stardom overnight. Since then she's released her 2011 critically acclaimed full-length Vows and toured alongside Foster the People and the Kooks. On tour Kimbra sings tracks from her 2014 album The Golden Echo among older fan favorites and delivers one exciting performance after another.

"Kimbra put on one of the best shows I have seen in years. Her band was very good and the live performance was so much better than the recording."

"Amazing show. Band was incredibly tight! There was so much energy and good vibes in the atmosphere! I will make it a point to see her again whenever I can."

"I had a great time at the show. Kimbra is great live and you can tell she really gets into it. I would definitely see her live again because she really was amazing."