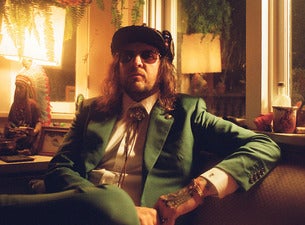 Garage rocker King Tuff's good luck charm is a glimmering sun-shaped medallion that he wears around his neck every time he's on stage. It's a fitting accessory for the charismatic frontman because his raucous sets are feel-good affairs that leave ticket buyers radiating with positive vibes. In concert Tuff is accompanied by bassist Magic Jake and drummer Kenny Tudrick, and together the trio serves up danceable tracks chock-full of catchy hooks, fuzzy guitar solos, splashes of psych and punk, and retro grooves that channel T. Rex. Tuff is especially entrancing as he lords over the moshing  crowd, shredding away on crowd favorites like "Keep On Movin'" and "Bad Thing". Riding high on the success of his 2014 hit album Black Moon Spell, Tuff gives concertgoers unbeatable live performances they'll be raving about for years.

Vermont-born King Tuff, aka Kyle Thomas, grew up idolizing bands like Green Day and Black Sabbath. He started writing songs when he was 10 years old and adopted the King Tuff moniker in his teens as a play on his initials and the name King Tut. In 2006 he self-released the record Mind Blow, launching his solo career while simultaneously performing in freak-folk band Feathers and metal outfit Witch. He made his full-length debut with 2008's Was Dead before putting his solo career on the backburner to relocate to Los Angeles, make an album with indie pop group Happy Birthday, and tour as a member of punk rock outfit Hunx & His Punx. Tuff returned as a solo artist in 2012 with his self-titled sophomore release, which found him jumping to Sub Pop Records and expanding his sound to include retro-pop melodies. In 2014 he released his critically acclaimed third album Black Moon Spell, a catchy collection of fuzzy glam rock and funky garage pop produced by The Go's Bobby Harlow. The album debuted at No. 1 on Billboard's Heatseekers chart and has fans eager to catch Tuff's epic live performances.