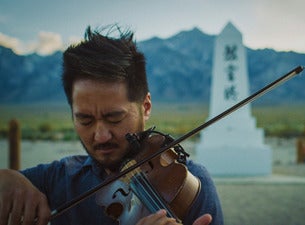 Singer, multi-instrumentalist, and producer Kaoru Ishibashi has become a familiar face on stages around the world as a touring violinist for acts Of Montreal and Regina Spektor, but lately it's his solo indie rock project Kishi Bashi that has fans jamming out. His kaleidoscopic tunes mix lush violin, exotic Far East elements, swirling vocal harmonies, and electronic touches to create a brilliant and unique sonic world full of soaring melodies and head-spinning rhythms. At his live shows he brings buoyant tunes like "Bright Whites" and "Atticus in the Desert" to life with the help of a looping pedal and a full band including drums, banjo, and guitar, treating fans to dynamic performances that always get them moving and smiling.

Seattle-born, Virginia-raised Kaoru Ishibashi began playing the violin at age 7 and continued studying the instrument after high school at Boston's prestigious Berklee College of Music. In 2002 he moved to Brooklyn and formed the synthpop outfit Jupiter One with guitarist Zac Colwell. The band self-released several limited edition records in the mid-'00s, and in 2008 they dropped a self-titled debut album that landed them on tour with Regina Spektor. While on the road Ishibashi met Of Montreal founder Kevin Barnes, and joined him as a member of Of Montreal's touring band in 2010. The following year he returned to his parent's home in Virginia to begin recording his solo debut as Kishi Bashi. The result was 2012's 151a, a critical success that earned praise from NPR and received placement in commercials for Windows, Sony, and car company Smart. After a 2013 tour of the US and Europe in support of the release, Ishibashi issued his second album as Kishi Bashi, 2014's Lighght. The album peaked at No. 52 on the Billboard 200, a huge feat for a niche indie artist and cause for celebration among his loyal fanbase.