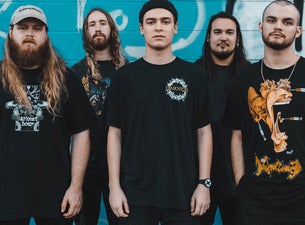 The evolution of heavy music has made it so the lines are blurred between genres and sounds, particularly where punk, hardcore, and metal are concerned. As the members of Knocked Loose will be the first ones to admit, they wouldn't have it any other way. The band's 2016 full-length debut, Laugh Tracks, is an aggressive encapsulation of post-hardcore screamo angst, as evidenced by its amalgamations of thrash metal riffing, sludgy tempos, and metalcore-caliber growls. However, the album's subtle nods to other styles — including nu-metal's hip hop-inspired vocals and early heavy-metal smolder — underscore Knocked Loose's commitment to diversity.

After signing with Pure Noise Records in 2016, Knocked Loose's career picked up considerably. In addition to the release of Laugh Tracks, the group earned high-profile opening slots on tours with fellow genre-flouters Every Time I Die and Beartooth, and a spot on the 2017 Vans Warped Tour. Touring with and being around so many different bands has helped Knocked Loose hone a confrontational live show. At their gigs, it's not out of the ordinary to see fans doing flips and jumps off the stage into a teeming crowd of moshers, while Garris growls and stomps around like he's hunting prey. No wonder the group fits in no matter where they go — Knocked Loose makes other groups bend to their approach, rather than changing themselves to fit in with anybody else.