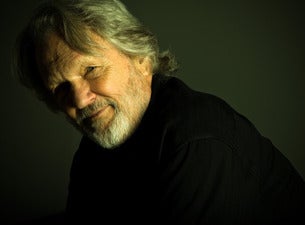 When Kris Kristofferson hits the stage, it's clear why he's become a legend of outlaw country. He plays it like he feels it — as an unfancy, master singer-songwriter, sometimes with a band and sometimes without, strumming his acoustic guitar and delivering his game-changing songs with well-weathered style. His character-rich voice lets you know he's been around the block more than once, and the songs combine a poet's command of language with a country singer's knack for putting things together organically so they go down easy. Along the way, he slips in his one-of-a-kind perspective on things. He might be unpacking the wistful romanticism of "Me and Bobby McGee" or depicting the morning-after madness of "Sunday Mornin' Comin' Down," but he always makes you see the world a bit differently.

After Kris Kristofferson first started making waves in Nashville in the late '60s, country music (and American music) was forever changed. Singer-songwriters had never written so frankly about sensuality, and country had never had its own Bob Dylan before. With Kristofferson came a glorious collision of poetry-laden lyrics and countercultural sensibilities with the attitude of rock 'n' roll and the template of classic country. Besides making waves with his own albums, he reached into our collective conscience through his songs' numerous covers, performed by artists like Janis Joplin ("Me and Bobby McGee") and Sammi Smith ("Help Me Make It Through the Night"). Before the '70s were over, his natural charisma and chiseled countenance had helped make him a movie star too, with films like Alice Doesn't Live Here Anymore and A Star Is Born. Later he became a member of legendary supergroup The Highwaymen, alongside Johnny Cash, Waylon Jennings and Willie Nelson. As the decades passed, Kristofferson has never backed away from his commitment to write and perform to the utmost of his abilities. He's a true-blue American legend.