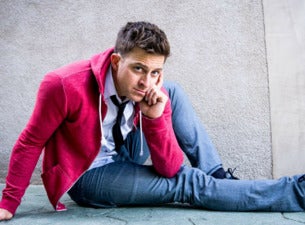 Rising comedian and TV personality K-Von consistently cracks ticket buyers up with playful riffs on his atypical ancestry. He grew up with an Iranian father and a Scottish-born, Midwest-bred mother, and jokes about being a racially mixed "mutt" while also insisting "once you go Persian, there's no other version". Energetic and self-deprecating, he makes crowds laugh hysterically with perfectly timed punch lines, physical humor, and street smart sensibilities. He also interacts with audiences by tailoring his jokes for members of the crowd, giving ticket buyers a one-of-a-kind live experience that'll have them rolling on the floor with laughter.

K-Von, a.k.a. Kevan Moezzi, grew up in Reno, NV and developed an early love for comedy thanks to his idols David Letterman and George Carlin. After graduating from the University of Nevada he moved to Los Angeles to pursue comedy full time. He made his first stage appearance at Hollywood's World Famous Comedy Store (where Robin Williams and Richard Pryor also started their careers) and began booking up to 10 stand-up shows per week. In 2009 he toured with fellow Iranian-American comedian Maz Jobrani, and the two continue to work together to this day. In 2010 K-Von appeared as a featured cast member on MTV's hidden camera show Disaster Date and returned as a recurring character for two seasons. He has since appeared on Showtime's Comics Without Borders, Style Network's Hot Guys Who Can Cook, Good Morning America, and CNN's HLN. In 2015 K-Von is slated to release Nowruz: Lost & Found, a documentary he made about discovering the meaning and traditions behind Nowruz, the Persian New Year.