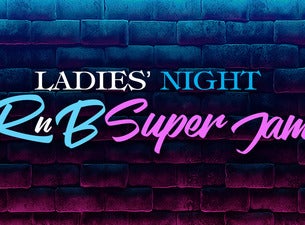 For years, Ladies Night R&B Super Jam has lit up Valentine's Day season with smooth soul from some of R&B's biggest stars. The 2019 installment at Barclays Center will be headlined by legendary singer-songwriter Brian McKnight and First Lady of Bad Boy Records Faith Evans.

McKnight, who has been nominated for 16 Grammy Awards, is known for his buttery voice, which made singles like the lovelorn "Back at One" and the Vanessa Williams duet "Love Is" radio staples. His latest album, 2017's Genesis, updates his sound but keeps his commitment to solid songwriting intact.

Evans was a gold-selling R&B star from her debut. Her vocal turn on Puff Daddy's "I'll Be Missing You" — the 1997 elegy for her late husband The Notorious B.I.G. — made her a pop-radio staple. Her most recent album, The King & I, reconnects her with Biggie on songs produced by Evans and longtime Bad Boy collaborator Stevie J.

Atlanta's Jagged Edge ("Where the Party At," "Walked Outta Heaven"), Indianapolis' After 7 ("Can't Stop," "Heat of the Moment"), and Atlanta's Silk ("Freak Me," "I Can Go Deep") will bring the throwback heat with their vocal harmonies and seductive lyrics. Reggae duo Chaka Demus & Pliers will heat up the cold February night with reggae tracks like the worldwide smash "Murder She Wrote."

Philadelphia-based soul explorer Musiq Soulchild will perform forward-thinking tracks like his 2002 smash "Halfcrazy" and songs from his horizon-minded 2017 double album Feel the Real. One-time teen sensation Mario will show off his grown-up side, which he flaunted on his 2017 album Dancing Shadows.

Tough-talking ladies K. Michelle ("Can't Raise a Man," "V.S.O.P."), Marsha Ambrosius ("Hope She Cheats on You [With a Basketball Player]," "Cold War"), and Lil' Kim ("How Many Licks," "Magic Stick") will be on hand to hold it down for any audience members who, while in the mood to celebrate love, are also more than happy to claim their status as strong women in song.