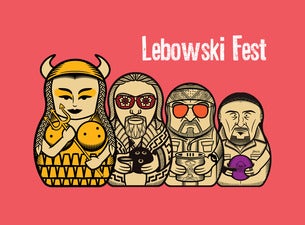 One of the 20th century's most lasting films is also one of its most unlikely success stories. To this day, 1998's The Big Lebowski remains a powerful presence in the pop culture consciousness. Not since The Rocky Horror Picture Show has a film acquired such a devoted fan base.

Even decades since its release, the Joel and Ethan Coen cult hit continues to be one of Hollywood's most quotable movies of all time. A festival in honor of the film and its honorable hero — "the Dude" — seems a natural extension of this cinematic phenomenon.

Co-founded by Will Russell and Scott Shuffitt, the annual Lebowski Fest was born in 2002 in Louisville, Kentucky. The first festival saw a total of 150 Lebowski fans (or "Achievers") gather to pay tribute to the Coen brothers' comedic masterpiece. It's since become an overwhelmingly successful event, landing in cities across the U.S., including Austin, Boston, Chicago, Las Vegas, Los Angeles, Milwaukee, New Orleans, New York, Pittsburgh, Portland, San Francisco, and Seattle, as well as across the pond in London.

The two-day festival includes a screening of the film, as well as live music (maybe even by The Dude himself), an unlimited bowling party, and costume and trivia contests. Though not required, it's highly encouraged (and a tradition) to dress up as a character from the film, and there's plenty of merch available to purchase on-site. There will also be many chances to enjoy a White Russian, The Dude's libation of choice.

If you're lucky, you might even catch a rare appearance from one of the film's actors. In fact, Jeff Bridges, who played the film's slacker/stoner star, appeared at the 2005 Lebowski Fest to perform Bob Dylan's "The Man in Me," a song featured in the movie.

In 2011, some of the cast reunited at the event in New York, including Bridges, Julianne Moore, John Goodman, Steve Buscemi, and John Turturro. But even without an A-list appearance, Lebowski Fest has become an ongoing cult hit all its own. Heck, there's even a documentary about it, called — what else — The Achievers.