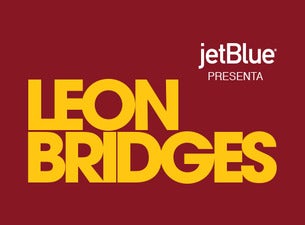 Leon Bridges sings soul and gospel straight from the heart, forming an instant connection with audiences wherever he plays. His smoothly cool vocals recall Sam Cooke and Otis Redding, and fans can’t help but be transported to the ‘50s and ‘60s R&B heyday as he belts out songs like “Coming Home”, “Smooth Sailin’”, and “Better Man”. His backing band completes the Stax-inspired sound of these songs with reedy organs, melodic basslines, blaring sax, and female backing vocals. Leon Bridges is ready to bring his own R&B style and effortless croon on tour, much to the delight of fans aross the country.

Leon Bridges was born in Atlanta, GA in 1989, though he grew up in Fort Worth, TX. He began writing songs at a young age, learning simple guitar chords to accompany his lyrics. He was working as a dishwasher and playing open mic nights when he happened to befriend White Denim guitarist Austin Jenkins. With Jenkins’ assistance and vintage equipment, the singer was able to cut demo versions of “Coming Home” and “Lisa Sawyer” in 2014. After receiving over 800,000 streams of these songs, the singer signed with Columbia Records, promptly releasing “Coming Home” in 2015 as his first single. An album of the same name arrived in June and garnered critical acclaim for the songwriter’s classic style and poised songwriting. With fans eagerly awaiting a follow-up to his smash debut, Bridges continues to amass an ever-growing fanbase with his spiritually moving live performances on tour.