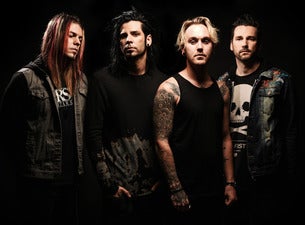 Heavy-hitting New Zealand rockers Like a Storm have been making waves overseas with their muscular sound and high-octane performances. Brothers Chris, Matt, and Kent Brooks bring an undeniable chemistry to the stage, consistently thrilling audiences at their live shows with headbang-inducing thrashers like "Just Save Me" and "Love the Way You Hate Me". From their long hair and glammed-up style to their searing guitar riffs and blistering drums, Like a Storm deliver a visually and sonically unforgettable concert experience on tour.

Like a Storm was formed in 2005 after brothers Chris, Kent, and Matt Brooks first jammed together in their native New Zealand. They instantly realized their unique chemistry, and after some deliberation they moved the band to Vancouver to begin work on their first album. That album, The End of the Beginning, was released in 2009, generating significant buzz in hard rock circles and landing the band on tour with Creed. They continued their rise in 2010 with the popular single "Chemical Infatuation", which quickly became a live favorite on the band's tours with Shinedown and Puddle of Mudd. Their leave-nothing-behind performances on the road paid off -- in 2011 they were voted Tunelab's "Most Fan-Friendly Band".  Following the 2012 release of their sophomore album Chaos Theory, the band undertook an acoustic tour as well another stint on the road with Creed. They continued to generate buzz in 2014 with their third album Awaken the Fire, treating fans to cuts from the release on a string of unforgettable tour dates with fellow rockers Otherwise.