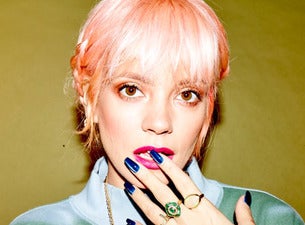 Pop chanteuse and controversy queen Lily Allen has been stirring the pot ever since her debut single "Smile" topped British charts in 2006. While she may have matured as a songwriter, her stunning soulful voice hasn't changed a lick and neither has her risqué attitude -- after a several year hiatus, Allen made a triumphant return to the charts in 2013 with "Hard out Here," a no-punches-pulled critique of the cutthroat world of pop stardom.  Equal parts flirty and brash, the provocative Allen will treat ticket buyers to classics like "F*ck You" alongside newer hits like "Air Balloon" on her latest tour.

London-born Lily Allen got an early start in show business, landing several acting roles in childhood thanks to her actor father and producer mother. After a tumultuous youth that saw her attend 13 different schools -- several of which expelled her for smoking and drinking -- Allen was overheard  one day singing Oasis's "Wonderwall" by budding soprano Rachel Santesso, who quickly took Allen under her wing for vocal lessons. In 2005 she signed to Regal Recordings, but due to budgetary constraints she was left to promote her music via Myspace, where early singles like "Smile" and "Alfie" attracted hundreds of thousands of fans. By the time her debut album Alright, Still was released the following year  she already had a substantial following, paving the way for the album's quick rise to No. 2 on the UK Albums Chart. Her next two albums, 2009's It's Not Me, It's You and 2014's Sheezus, both skyrocketed to No. 1 on the British charts, cementing her role as a dominant force in English pop music and paving the way for continued touring.