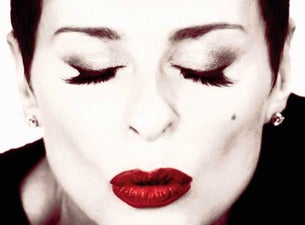 With a career spanning more than 20 years, Lisa Stansfield is one of the most well-known soul singers of this generation. A string of hit singles and albums created mass popularity around the world, both in her native UK and Ireland and across Europe and here in the US. Known for making bold decisions, she is also an accomplished actress whose long break from recording ended in 2013 with the release of her first album in almost a decade.
Launched into the industry by a television talent show, her first solo album release in Great Britain went to No. 2 in the charts in 1989. The album, named Affection, went triple-platinum in the UK and its lead single ”All Around the World,” went to No. 1 in six countries, making Gold status in five charts and Platinum in the US. The follow-up, Real Love, was released in 1991, followed by So Natural in 1993 and her self-titled album, Lisa Stansfield, was released in 1997. This record also reached No. 2 in the Great British Album Chart, earning it Gold status, as a well as several of its singles reaching No. 1 in the United States charts. Next came Face Up in 2001 and The Moment in 2004, which charted well in the German market and made Gold status for her once more.
2014 will see the release of her latest project, Seven, which is set to relaunch her musical career alongside a string of tour dates and public appearances. Featuring the single “Can't Dance” and numerous others written by her long-term songwriting partner Ian Devaney, fans are eagerly awaiting its release. A tour of Europe in spring 2013 and further dates in October to November allowed glimpses of her new sound, featuring her timeless vocal set into contemporary soul pop tunes. Spring and summer 2014 will see her performing across Europe, in Switzerland, Holland, Belgium, France, Germany, Italy and Bulgaria. Critics have praised her return to the stage.
Over the length of her career, Lisa Stansfield has been nominated for an incredible 59 awards, of which she has won an impressive 38. From three BRIT Awards in 1990, for Best Newcomer and for Best British Female in both 1991 and 1992, to one Billboard Music Video Award, via three DMC Awards, two Ivor Novello Awards, one Silver Clef, one Women's World Award and two Grammy nominations, her collection of prizes is staggering. Her career is set to continue scaling these great heights for many more years.