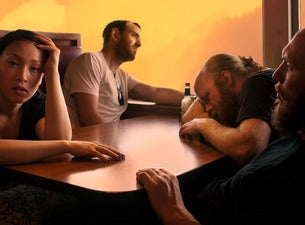 With their unique combination of downtempo, synthpop, and even post-punk elements, Sweden's Little Dragon have arrived at a sound that is all their own.  Their fourth album, 2014's Nabuma Rubberband, is their most ambitious yet, and their live show has grown to accommodate the new swirl of electronic textures and sonically innovative percussive elements heard on the record. Whether charismatic frontwoman Yukimi Nagano is lending her soulful vocals to fan-favorites like "Swimming" or new cuts like "Klapp Klapp," her commanding presence and otherworldly movements will have fans up and on their feet at the band's upcoming tour dates.

Goteberg, Sweden's Little Dragon was formed by a group of high school friends in 1996, but the band didn't make their on-record debut until double A-side single "Twice"/"Test" hit shelves in 2006. Their self-titled debut LP was released the following year, garnering praise for its unique electronic sound and frontwoman Yukimi Nagano's smoky, ethereal vocals.  After touring extensively throughout Europe, the band returned in 2009 with sophomore album Machine Dreams, drawing another round of critical praise and enjoying a growing popularity overseas.  2011's Ritual Union was another critical success, resulting in extensive touring and spawning innovative videos for singles like "My Step" and "Brush the Heat." Following the 2014 release of fourth album Nabuma Rubberband, the band hit the road once again for a string of highly anticipated North American tour dates.