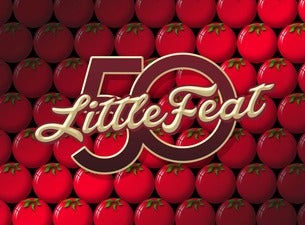 One of the most eclectic and treasured bands in American music, Little Feat are celebrating their rich history with a 50th anniversary tour. Guitarist and vocalist Paul Barrere leads a seasoned group of players as they perform a signature blend of rock, R&B, country, folk and more in venues across the U.S.

The joy and vitality the seven-member band exude on stage is all the more amazing given the triumphs and tragedies in the Little Feat saga. Formed in 1969 by guitarist Lowell George after leaving Frank Zappa's Mothers of Invention, Little Feat became one of the most stylistically adventurous bands of the 1970s. Though the band's first chapter ended with George's death in 1979, Little Feat would reunite for several new albums and many boogie-filled tours from 1987 to the present. There was no doubting how much life was left in Little Feat when "Hate to Lose Your Lovin'" hit the top of Billboard's Mainstream Rock singles chart in 1989.

Along with live performances of such fan favorites as "Two Trains" and "Hamburger Midnight," the warm reception to recent albums such as 2012's Rooster Rag confirm their place in the hearts of many generations' worth of Little Feat listeners.

Never a group to be pigeonholed, Little Feat have spent five decades roaming between styles and showing off their skills in songs that range from bluegrass to the blues and soul to country without ever staying in one place for too long. The result is a unique musical blend that encompasses American music in all its breadth and depth.

Formed in 1969 by Lowell George — the guitarist in Frank Zappa's Mothers of Invention — and keyboardist Bill Payne, Little Feat quickly gained accolades and a growing cult audience thanks to the stylistic diversity and instrumental dexterity on early albums like 1972's Sailin' Shoes. Wider commercial success arrived with the tasty gumbo of Southern rock and New Orleans R&B on their 1973 classic Dixie Chicken.

Though the tragically early death of Lowell George led to Little Feat's disbandment in 1979, it wasn't long before the players caught the bug again. The band returned with 1988's Let It Roll, a gold album that ushered in a new era for Little Feat that's continued into this century.

A guitarist and vocalist who began his Little Feat tenure on Dixie Chicken, Paul Barrere leads the band's latest edition, ensuring that the present is just as vital as the band's storied past.