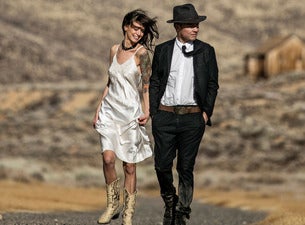 Little Hurricane are causing a ruckus across the nation with their infectious blues-rock and unique band dynamic. Despite their minimal setup — the band often takes the stage with just a single guitar and drum kit — members Tone Catalano and C.C. Spina still manage to create an earth-shattering sound, mixing grungy guitars with sultry vocals to stunning effect. Whether they’re doing call-and-response on “Crocodile Tears” or delighting fans with new hits like “Sheep In Wolves Clothes,” Little Hurricane are set to take the US by storm as they head out on tour in support of their sophomore album Gold Fever.

Little Hurricane formed in 2009 when C.C. Spina hung up her chef's apron and decided to pursue drumming full-time, posting an ad on Craigslist in hopes of finding potential collaborators. Tone Catalano -- a recording engineer, songwriter, and guitarist -- quickly responded to the ad, and the two began writing music together in C.C.'s living room. Full of gritty guitars and methodical drum beats, Little Hurricane’s raw, bluesy tracks stem from influences by some of the best in rock including the Black Keys, Bob Dylan, and the White Stripes. Since generating significant buzz with their 2011 debut Homewrecker, the band has opened for artists like the Shins at Austin’s SXSW and been dubbed as a “San Diego blues duo set to break out” by Rolling Stone magazine. Little Hurricane’s latest release Gold Fever features the hit single “Sheep In Wolves Clothes” a blues-rock gem that is sure to be a live staple as the band returns to the stage for a string of highly anticipated tour dates.