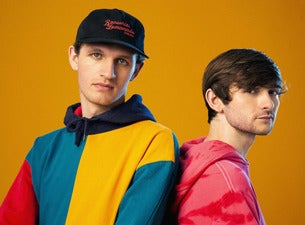 In times where it becomes easiest to feel anything but, Louis the Child is here to make you happy. Over 50 million Spotify streams later, the two Chicago-bred wunderkinds have done just that, spreading glitzy, electronic bliss through stadium-ready anthems like "It's Strange," Icona Pop collaboration "Weekend," and "Fire." But their versatility and emotional range shines through brightest on most recent release, "Love Is Alive" (ft. Elohim), showcasing an understated tenderness, which Billboard praised as "soft and soothing."

Citing influences ranging from James Blake to Robert Glasper, duo Robby Hauldren and Freddy Kennett blend musical complexity and sonic experimentation in an individual strand of future bass that defies pop formulas, while catching the ear of outlets such as Pitchfork, BBC, Pigeons and Planes, and Taylor Swift's Instagram. Since supporting the likes of Madeon, Porter Robinson, The Chainsmokers, and Big Gigantic. Mixmag's #1 artist taking American dance music to the next level has quickly risen to headliner status. Currently in the midst of an extensive spring tour, Louis the Child is fully prepared to bring smiles to the crowds of Bonnaroo, Hangout, Middlelands, and more major festivals across the globe this summer.