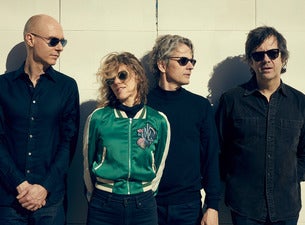 Beloved ‘90s dream pop outfit Luna ended a decade-long hiatus in 2015, thrilling fans with the announcement that they were bringing their fuzzed-out, gauzy tunes on the road for a US reunion tour. The band’s relaxed tempos, dreamy guitar swirls, and poetic lyrics make for a sublime live show, and the 10-year break has fans dying to catch them back in action. In concert frontman Dean Wareheim is a master of chill intensity, delivering his unadorned vocals with effortless cool while the rest of the band conjures up a beautifully nuanced sound world of spindly guitars and snaking basslines. Whether they’re waxing nostalgic with early favorites like “Slide” and “Anesthesia” or performing cuts from their 2004 farewell album Rendezvous, Luna always immerses ticket buyers with their catchy melodies, soaring guitar work, and relaxed stage presence.

Singer and guitarist Dean Wareheim formed Luna in 1991 following the breakup of his influential alt rock group Galaxie 500. He enlisted bassist Justin Harwood and drummer Stanley Demeski, and in 1992 the trio released Luna’s debut album Lunapark. The record was a critical success, leading to extensive touring that firmly established the band as an indie pop force to be reckoned with. Guitarist Sean Eden joined the band in 1993 for the release  of the Slide EP, and in 1994 the quartet issued their sophomore album Bewitched. They followed up in 1995 with Penthouse, a seminal record that Rolling Stone named one of the essential albums of the ‘90s. Following the release of 1999’s The Days of Our Nights, Harwood was replaced by bassist Britta Phillips, who eventually married frontman Dean Wareheim. The band released several more albums in the early ‘00s but disbanded after 2004’s Rendezvous. In 2015 Luna reunited for a tour of Spain and the US, proving they hadn’t lost a beat with a string of nostalgic performances that have fans crossing their fingers for a new album.