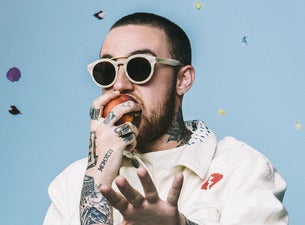 Pittsburgh, Pennsylvania rapper Mac Miller is quickly making a name for himself in the up-and-coming hip-hop community with his eclectic and inventive rhymes and throwback sound. Born Malcolm James McCormick in 1992, Miller taught himself bass, drums, guitar and piano, as well as becoming an accomplished producer under the alias Larry Fisherman. In early 2010, Miller signed with Pittsburgh-based Rostrum Records and released his debut album Blue Slide Park in November 2011, debuting at No. 1 on the Billboard 200 even though it was put out completely independently. Ticket holders caught him on two tours with supporting acts Casey Veggies and The Cool Kids, before opening shows for 2012’s Under the Influence of Music tour headlined by Wiz Khalifa. His sophomore album Watching Movies with the Sound Off was released in June 2013, with guest spots from Ab-Soul, Schoolboy Q and Tyler, the Creator, and production assistance from Diplo, Flying Lotus and Pharrell Williams. It debuted at No. 3 on the Billboard Hot 100 with the singles Goosebumpz, S.D.S., and Watching Movies. In the support of the album, Miller headlined concerts with Action Bronson, Chance the Rapper and Earl Sweatshirt, before playing with Lil Wayne and 2 Chainz in Europe.