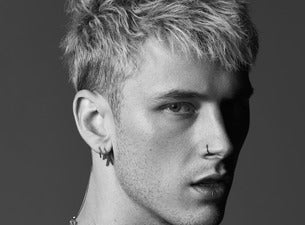 Tickets to see Machine Gun Kelly on tour were in high demand in 2013 thanks to the fast-rising Ohio rapper's growing reputation as a charismatic and energetic club performer who's not afraid to hurl himself into the crowd or even to invite fans to join him on stage. MGK has played hundreds of concerts since the 2012 release of his debut album, Lace Up, a set that hit No. 2 on the Billboard 200 chart and  includes the gold-certified single "Wild Boy" (featuring Waka Flocka Flame). Born Richard Baker to missionary parents in Houston, MGK moved constantly throughout his childhood before settling in Cleveland when he was in high school. There he continued to hone the rap skills he's started to build in junior high. In 2009, he took consecutive victories at Harlem's Apollo Theater amateur night, becoming the first white rapper to win the competition. A series of increasingly popular mixtapes followed, which led Jimmy Iovine to sign him to a deal with Interscope's Bad Boy Records imprint in 2011.