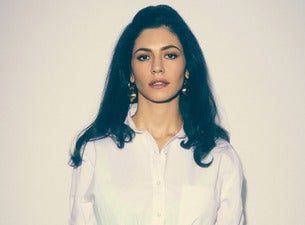 MARINA & THE DIAMONDS IN CONCERT:

Welsh electropop sensation Marina & The Diamonds has become a favorite with stateside audiences thanks to her gorgeous voice, iconic stagewear, and dance-worthy live shows. Marina  sings the confessional "I’m a Ruin” on the debut single from her 2015 album Froot, and she's even more passionate when she performs her soaring, emotional electro tunes in concert. Cuts from Froot fit perfectly alongside older favorites like "I Am Not a Robot" and "How to Be a Heartbreaker", making for career-spanning shows on tour sure to move fans both new and true. From her outré fashions to her stunningly dynamic voice, Marina always gives ticket buyers a visceral concert experience.

Marina & The Diamonds is the brainchild of Marina Diamandis, a Welsh-born singer-songwriter who grew up surrounded by the arts but didn’t begin writing music until age 18. In 2005 she adopted the moniker Marina & The Diamonds – a reference to her fans, not her backing band – and in 2007 she self-released her debut EP Mermaid vs. Sailor via Myspace. The record caught the eye of Neon Gold Records, who sent her out for a 2008 tour with Gotye and released her debut album The Family Jewels in 2010. The record was a critical and commercial success, peaking at No. 5 on the UK Albums chart and drawing her out for the Family Jewels Tour. Marina’s 2012 follow-up Electra Heart was an even bigger hit, topping the UK Albums Chart and cracking the Top 40 in the US. Since then she has played at festivals around the world, supported Coldplay on their Mylo Xyloto Tour, and launched her own fashion line.