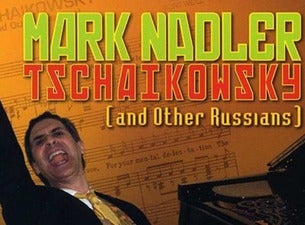 Renowned NYC-based pianist and cabaret performer Mark Nadler has been cracking audiences up with his offbeat take on classic show tunes since the mid-'80s. At his critically acclaimed revues, Nadler lends his booming voice and incisive wit to both classic and forgotten Broadway songs from the last 100 years, always delivering the material with an unexpected -- and frequently hilarious -- twist. Whether he's performing longstanding favorites like "I Love a Piano" or powering through his signature medley of "50 Songs From 1961", Nadler treats fans to an animated and creative live show that's as virtuosic as it is funny.

Iowa-born Mark Nadler was interested in Broadway from early childhood, and at age 10 he began singing and playing the piano at local saloons. He spent his high school years studying the performing arts at Michigan's Interlochen Arts Academy, and at age 17 he moved to New York City. Nadler quickly made a name for himself in the city's underground cabaret scene with his incredible piano chops, sterling sense of humor, and risqué live performances. Hilarious one-man shows like Let's Misbehave: A Cole Porter Soirée and Tchaikovsky (and Other Russians) earned him numerous awards from the Manhattan Association of Cabarets (MAC), and in 2003 he earned the Cabaret Bistro Award for "Continuing to Raise the Standards of Cabaret Performance". In addition to his acclaimed revues, Nadler has performed as a piano soloist with several orchestras including the Baltimore Symphony, Oregon Symphony, and the National Arts Centre Symphony in Ottawa. A multi-talented performer with a flair for the dramatic, Nadler continues to leave audiences in stitches on his hilarious tours.