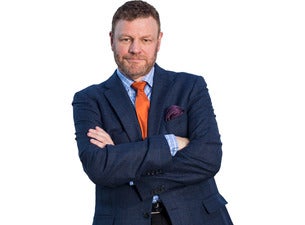 An author, broadcaster, and cultural commentator who's unafraid to express his bold and unique take on today's most controversial topics, Mark Steyn can't help but give the straight goods to anyone who's willing to listen. That he does it with such wit, style, and insight is why his voice has become so valued. A regular guest host for The Rush Limbaugh Show and Tucker Carlson Tonight, Steyn joins his friend Dennis Miller to present The Adorable Deplorable, an evening of "thought-provoking and comedic satirical conversation" that promises to make audiences both laugh and think.

Steyn has been approaching tough subjects with a sense of humor ever since the Toronto native began his career in the U.K. After becoming successful as a film and theater critic at newspapers like The Independent and The Spectator, Steyn branched into political commentary.

In addition to his writings for such publications as The Atlantic, The National Review, and The Wall Street Journal, he gained a fervent readership thanks to provocative books like America Alone: The End of the World as We Know It and Lights Out: Islam, Free Speech and the Twilight of the West.

Even critics on the other end of the political spectrum — including the late Christopher Hitchens — spared some praise for the strength of Steyn's ideas and writing. Honors for Steyn include the 2006 Eric Breindel Award for Excellence in Opinion Journalism, the 2007 Center for Security Policy's Mightier Pen Award, and the 2018 George Jonas Freedom Award by the Justice Centre for Constitutional Freedoms.

A lifelong music lover as well as an astute critic of musical theater, Steyn also has recorded several albums as a jazz singer, including a Christmas album with vocalist Jessica Martin and a collection of cat-themed songs called Feline Groovy.

While he may be less likely to demonstrate his vocal skills when filling in for Rush Limbaugh and Tucker Carlson on their hugely popular programs, Steyn brings the confidence and wit of a true showman to all his endeavors. And that's true whether he's making his point on the page, before the camera, or on a stage.