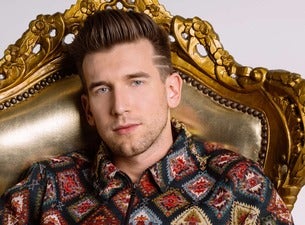 Austin native Max Frost combines elements of hip hop, soul, and blues rock to achieve an eclectic indie pop sound that transcends its influences. Frost has been performing since he was 12 and his confidence on stage is immediately apparent at his live shows, where he hammers out sharp riffs on his electric guitar and delivers his fiery vocals with effortless style. His retro guitar tones and bluesy vocals give high-energy tracks like “White Lies” and “Paranoia” an irresistible vintage hue, but Frost's songs remain decidedly current thanks to slick production techniques and the incorporation of modern elements from R&B, hip hop, Top 40 pop. Taken as a whole, Frost’s sound is both a blast from the past and a blueprint for the future, and ticket buyers at his live performances can’t help but love the classic-meets-cutting-edge vibe.

Max Frost began playing music at age eight, and by his teens he was playing in bands and collaborating with Austin music scene notables like rocker Bob Schneider and hip hop producer Kydd. Inspired by R&B and neo soul musicians like D’Angelo and Erykah Badu, Frost started incorporating modern beats into his retro-rock sound. After dropping out of the University of Texas-Austin to pursue music full time, he scored a breakthrough in 2013 with the single “White Lies”, which reached No. 1 on The Hype Machine and led to a deal with Atlantic Records. He made his debut on the label in late 2013 with the EP Low High Low, a critically acclaimed effort that catapulted “White Lies” to the Top 40 on Billboard’s Adult Alternative Songs chart. A wicked talent with a fresh sound and songwriting chops for days, Frost has fans waiting with bated breath for his hotly anticipated full-length debut.