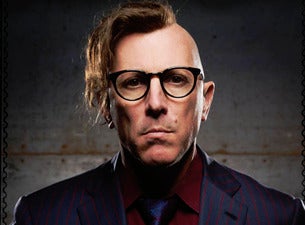 Progressive metal icon Maynard James Keenan has long been recognized for his role as frontman of legendary rock band Tool, but lately it's his solo show that has been bringing fans out in droves. The Grammy Award-winning multi-talent is revered for his intense showmanship and onstage antics, and whether he's performing solo or with Tool, he never fails to deliver heart-pounding performances. From classic Tool hits like "Schism" to more recent cuts from his solo side project Puscifer, MJK will cover plenty of ground on his upcoming tour, treating fans to adrenalin-filled sets they won't soon forget.

Born in Ohio to a Southern Baptist family, Maynard James Keenan joined the US Army in the early '80s, taking on a rigorous West Point curriculum that included advanced level math, English, glee club, and a featured role on the wrestling team. Shortly after completing the terms of his enlistment, he moved to Los Angeles and began playing music with various groups. In 1990 MJK formed Tool with guitarist Adam Jones, beginning an impressive run that would include several chart-topping albums, a slew of hit singles, and three Grammys. In 1999, he founded the rock supergroup A Perfect Circle, continuing his chart success with another string of massively successive albums and singles. With the release of two albums in the '00s under the moniker Puscifer, Maynard James Keenan proved his capabilities as a solo performer, paving the way for continued touring.