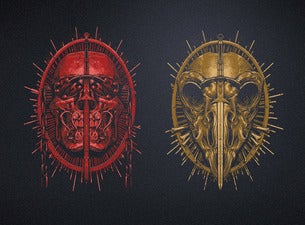 Thrash masters Megadeth pioneered one of the most brutal sounds in metal more than 30 years ago by combining biting social commentary with virtuoso shredding and warp-speed tempos. On 2016’s Dystopia World Tour, co-founders and heavy metal madmen Dave Mustaine (guitar/vocals) and David Ellefson (bass) once again bring their pummeling intensity to headbanging fans hungry for more ferocious riffs and searing solos. New additions Kiko Louriero (guitar) and Dirk Verbeuren (drums) push the group's shows to new heights of complexity as they rip through the earth-shaking, skull-rattling thrash metal that made Megadeth famous. They don’t hold back on classics like "Hangar 18," "Symphony of Destruction," and "Peace Sells" in concert, and nothing compares to experiencing the all-out sonic annihilation live.

Dave Mustaine has made an indelible mark on metal with the uncompromising sound he forged as the creative mastermind behind Megadeth. He achieved early notoriety when he joined Metallica and co-wrote several of their songs, but he split with the band before their 1983 debut Kill 'Em All. As luck would have it, Mustaine moved into an apartment above bassist David Ellefson, who woke him up one morning while practicing Van Halen's "Runnin’ with the Devil." Mustaine went downstairs to tell him to knock it off, but instead spent the whole day discussing music. The two founded Megadeth shortly after and began getting noticed in 1985 with their debut album Killing Is My Business… and Business Is Good! The group went on to release thrash landmarks like Peace Sells… but Who's Buying? (1986) and Rust in Peace (1990), enjoying platinum-selling success and critical acclaim well into the '90s. After an arm injury that left Mustaine unable to play guitar, the frontman announced a hiatus for the band in 2002 while he underwent strenuous physical therapy and retaught himself how to play. He recovered quickly, and a recharged Megadeth returned in 2004 with the well-received album The System Has Failed. The band recaptured headlines in 2010 by sharing a stage for the first time with Metallica, Anthrax, and Slayer – the other bands in the "Big Four" of thrash. And in 2016 Megadeth hit the road again to bring their scorching sound to fans on the Dystopia World Tour.