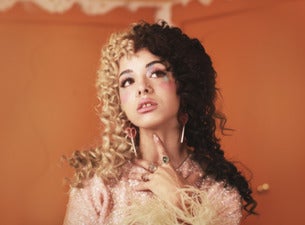 Melanie Martinez's first major performance was no small gig. As a teenager, she sang, played guitar and tapped a tambourine with her feet to a crowd of over 12 million on national television, where she impressed three of four judges on NBC's The Voice. Since that momentous day in 2012, the singer-songwriter with the two-toned hair has quickly grown into a full-fledged pop star with a quirky alter ego (Cry Baby) to boot. Onstage, Martinez plays with a colorful, childlike whimsy with striking visuals to match. She first took her show on the road in 2014 for the Dollhouse tour, followed by the Cry Baby world tour to support her 2015 debut album. In between, she landed support slots alongside Lindsey Stirling and Adam Lambert. In 2019, to coincide with her sophomore album and first feature film, K-12, Martinez announced her next world tour.

Melanie Martinez's surreal alt-pop draws from an array of influences, from The Beatles to 2Pac to Britney Spears, the latter who would help bring the young singer-songwriter to TV screens across the U.S. The Queens-born, Long Island–raised Martinez started writing poetry in kindergarten and taught herself how to play guitar by the time she reached high school. In 2012, during her junior year, she landed a televised audition on NBC's The Voice, where she sang Spears' "Toxic." The performance earned her a spot on Adam Levine's team. She made it to the top six before being eliminated. Keeping up the momentum of her newfound fame, Martinez started working on original music. In 2014, she released her debut single "Dollhouse." Soon after, she signed to Atlantic Records and unveiled her debut EP, also called Dollhouse. The following year, she began teasing music from her debut album, including lead single "Pity Party," a dark, dance-y spin on Lesley Gore's classic 1963 track "It's My Party." In August 2015, she released Cry Baby — a reference to her being called "cry baby" as a kid. The album debuted at No. 6 on the Billboard 200 chart. To support the album, Martinez took on the role of filmmaker, directing some of her own music videos. She'd continue pursuing those ambitions for her second album, 2019's K-12, which is accompanied by its own fanciful full-length feature film, written and directed by Martinez herself.