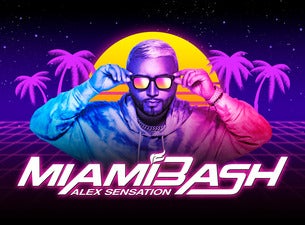 Miami has a long reputation for holding down a vibrant Latin music scene, and MiamiBash is further pushing the urban Latino movement to the fore. Now approaching its sixth installment, which takes place on April 13, 2019, at the American Airlines Arena in Miami, Florida, the mega concert has lived up to its mission statement to keep making the event "bigger and better every year."

In 2018, MiamiBash fulfilled that promise by showcasing some of Latin music's biggest and most exciting artists in the game. Attendees witnessed big names like J Balvin, Pitbull, Bad Bunny, Anitta, Luis Fonsi, and other powerhouses join the same stage in the same night, inspiring many a headline to declare the show "a glimpse into the future of reggaeton."

Organized by Alex Sensation, the event continues to solidify the reggaeton wave that has infiltrated the global mainstream. While 2018's lineup was packed with a cluster of household names, MiamiBash also has a reputation for helping launch the careers of many stars.

J Balvin and Maluma were some acts that performed at the Miami event's inauguration in 2014, and since then, both musicians have skyrocketed to global acclaim. J Balvin became the No. 1 artist with the most listens on Spotify in the summer of 2018. His songs and collaborations like "Ay Vamos," "Ginza," "Mi Gente," "X," "Safari," and Cardi B's "I Like It" have all peaked at No. 1 on the Billboard charts.

Maluma also has experienced a huge boost in popularity. He became the first solo artist to perform in Spanish at MTV's VMAs, and 10 of his hits have entered Billboard's Top 10 of Hot Latin Songs, like "Chantaje," "Felices Los 4," and "Borro Cassette." Keep an eye out for lineup announcements for the next edition of MiamiBash. Latin music lovers can anticipate another undoubtedly riveting year.