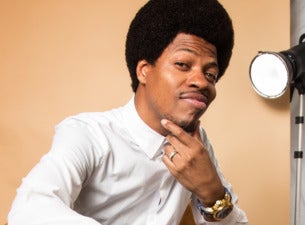 Mike E Winfield is the comedian that you see opening for all the big names, but you always forget his. Well, now you get to see him star in the show. On television, you've seen him on Showtime's Comics Without Borders, with Russell Peters, Comicview on B.E.T., and Comedy Central's Live at Gotham. He is also preparing for his upcoming appearance on the The Late Show with David Letterman.

He grew up in Baltimore and moved to Sacramento, marrying an older woman, but not fully understanding the impact of his life's decisions. He's a favorite in the Bay Area and  describes conflicts of life in such a hilarious manner that you want to help this young man. "Funny" is undeniable as you are already laughing as he walks to the stage. This is the show where you can bring the entire family and laugh all night.