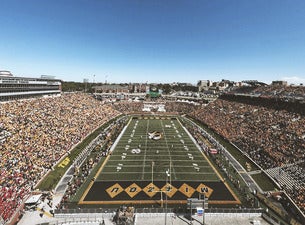 Memorial Stadium was opened in 1925 in Columbia, Missouri, as a tribute to Mizzou alums who had died in World War I. Its most distinctive feature is a berm rising out of the stadium's northern end zone, on which a 90-foot-wide-by-95-foot-high "M," formed by whitewashed rocks, keeps watch over the proceedings. In 1957, on the night before the all-important Nebraska–Missouri game, pranksters snuck into the stadium and changed the rock "M" to a rock "N." Thanks to some quick work from the groundskeeper and a crew of helpful young boys, the "M" was restored before kickoff, and the Tigers would come from behind to beat the Cornhuskers, 14-13.

In 1972, Memorial Stadium's playing surface was named in honor of former coach and athletic director Don Faurot, inventor of the split-T formation. Today the stadium is known affectionately as "The Zou." On game days, about two hours before kickoff, players and coaches do the Tiger Walk from the training complex to the stadium. Inside The Zou, keep an eye out for Truman the Tiger, the team mascot, and his taxi, a vintage Boone County fire truck. Between the third and fourth quarters, the marching band plays "The Missouri Waltz," and the stadium sways and claps along. If you really want to get into the spirit of the occasion, join in the "M-I-Z"/"Z-O-U" chant.

By general consensus, the greatest season in team history was 1960. Under head coach Dan Devine, now known mainly from the movie Rudy, the Tigers went 10-1, the only loss coming against archrival Kansas. The Jayhawks later had to forfeit their win, and so, as an official matter, the 1960 Missouri Tigers went undefeated. After beating Navy and Heisman Trophy winner Joe Bellino in the Orange Bowl, Mizzou claimed a piece of a disputed national championship.

This was the first of two non-consensus national championships, the second one coming in 2007 under coach Gary Pinkel. Quarterback Chase Daniel led the Tigers to the first 12-win season in school history, including a 36-28 victory over second-ranked Kansas that propelled Mizzou into the top spot in the BCS rankings. The season was punctuated with a Cotton Bowl victory over Arkansas, landing the Tigers in the top spot in the Anderson & Hester poll but fourth in the AP poll. A charter member of the Big 12, Mizzou joined the SEC in 2012.