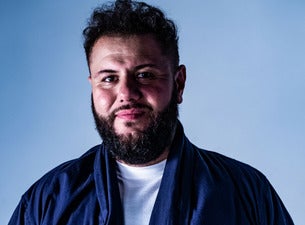 A proud Arab-American who challenges assumptions and prejudices in the funniest possible ways, Mo Amer is one of the comedy world's sharpest new talents.

Named in Rolling Stone's "10 Comedians You Need to Know" in 2018, Amer became a breakout performer thanks to The Vagabond, his first one-hour special for Netflix. Recorded at the Paramount Theatre in Austin in his home state of Texas, the special captures a comedian with a unique ability to tackle thorny subjects with a remarkably light touch.

Whether he's relating his family's experiences as Palestinian refugees who fled from Kuwait to Houston during the first Gulf War, talking about the complexities of being a Muslim in post-9/11 America, or riffing on getting seated next to Eric Trump on an airplane, Amer presents it from a perspective that's all his own.

Audiences have been appreciating that perspective since Amer first began developing his craft in Houston's comedy clubs as a teenager in the late 1990s. At the age of 19, he became the first Arab-American refugee comic to perform for U.S. troops stationed abroad. The young comedian also attracted an invaluable mentor in Dave Chappelle. "Hilarious, thought-provoking, and inspiring" is how the comedy superstar describes Amer, his opening act for more than 600 shows, including his 2017 residency at New York's Radio City Music Hall. (It's also the voice of Chappelle you hear as the announcer for The Vagabond.)

Amer's comedy career has taken him to more than two dozen countries on five continents. In addition to performing with Chappelle and as a headliner, he has toured widely with Preacher Moss and Azhar Usman in the Muslim stand-up collective Allah Made Me Funny. Amer has recorded two specials with the group: Allah Made Me Funny: Live in Concert and Allah Made Me Funny - Official Muslim Comedy Show - Live HMV Apollo.

Amer has also made appearances on The Late Show with Stephen Colbert, Comedy Central's @midnight, and TruTV's Comedy Knockout. He co-stars with Ramy Youssef on the Hulu original series Ramy.