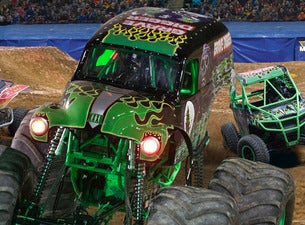 The hottest show on wheels returns with its trademark combo of races and stunts, pitting the best drivers in the biggest monster trucks against one another for a shot at the Monster Jam World Finals, a monster of a good time for the whole family.

The driver-athletes in each Triple Threat Series must compete in three vehicles — monster trucks, monster ATVs, and monster speedsters — over seven different competitions, some racing and some freestyle. The ATVs are the Monster Jam version of the four-wheeler you may have raced through the woods, and the Speedsters are UTVs, like a monster truck shrunk down to the size of a Jeep or dune buggy and outfitted with balloon tires.

In the freestyle competitions — Two Wheel Skills, Donuts, and Freestyle — Monster Jam fans in the stadium judge and score the events using their smartphones and a special live code on the JudgeZone web app. No other live sporting event gives the audience such involvement in the results.

Two-Wheel Skills isn't just your grandpa's wheelies. It's any trick where a maximum of two wheels stay on the ground, from a sky wheelie, bumper to the ground and nose to the air, to a walk-it wheelie, one back wheel at a time, to a stoppie nose-first where the driver moonwalks to the finish.

In the Donuts contest, some monster trucks spin and twirl so fast they create a cyclone, but it's not just about dirt, it's about style.

In the general freestyle, your favorite trucks (and drivers) perform feats of daring and strength in the mud and dust, climbing, rolling, diving, and falling the way things with four wheels rarely do — at least not on purpose.

Combined with the three types of vehicle races, whichever athlete has the most points at the end of the day is the overall winner. At the end of the season, 24 contestants will compete for the title of World Champion.