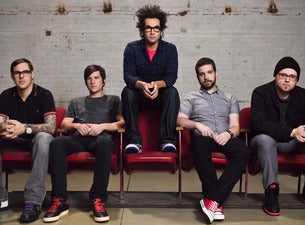 Since bursting onto the scene in the early '00s with the rollicking single "The Future Freaks Me Out", pop punk rockers Motion City Soundtrack have continually impressed fans and critics alike with their shout-along hooks, punchy drums, and battling guitars. In concert frontman Justin Pierre belts out emo-tinged, tongue-in-cheek lyrics with his signature falsetto, infusing each song with raw emotion that's perfectly complemented by the band's infectious exuberance. Especially entertaining is keyboardist Jesse Johnson, who hops over his keys, cranks out the cowbell, and mans the moog synthesizer, which has become a staple of the band's sound. Known for bringing their “A” game whenever they hit the stage, Motion City Soundtrack fervently perform fan favorites like "Everything Is Alright”, "L.G. FUAD” and “My Favorite Accident” along with recent hits “Her Words Destroyed My Planet” and “True Romance" at their crowd-pleasing live shows.

Former high school friends Joshua Cain and Justin Pierre formed Motion City Soundtrack in Minneapolis in 1997. After multiple lineup changes, the band finally solidified in 2002 with the addition of bassist Matt Taylor, drummer Tony Thaxton, and keyboardist Jesse Johnson. Later that year they dropped their debut album I Am The Movie, which was re-released a year later by Epitaph Records after the breakout success of single "The Future Freaks Me Out". Their sophomore album, 2005's Commit This To Memory, was produced by Blink 182 bassist Matt Hoppus and boasted the hit single "Everything is Alright". Over the next few years the band toured extensively, both as a headlining act and as an opener on Blink 182's 2009 world tour. They made their major label debut in 2010 with My Dinosaur Life -- an edgier, more experimental album released on Columbia Records -- but they returned to Epitaph for 2012's Go. With their highly anticipated Commit This To Memory 10 Year Anniversary Tour slated for 2015, ticket buyers are jumping at the chance to see these veteran indie rockers in concert.