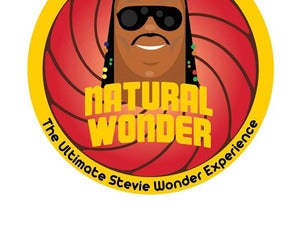 It takes one genuine talent to properly emulate another. But when it comes to Stevie Wonder — the musical genius who could play multiple instruments, sing multiple octaves, write hit songs, and produce hit albums — we're talking an almost unprecedented level of talent. Perhaps that's why so few artists have even attempted to go down the tribute-band path with Wonder's material. Nobody does it like the man himself.

One other man comes close: Gabriel Bello, a world-class musician, singer, and performer in his own right. When he fronts his core five-piece band — and especially when he embellishes the group with a full horn section — Bello virtually becomes Stevie in style and sound. He named his group Natural Wonder because his transformation is exactly that.

Bello was born to Dominican, music-loving parents in Massachusetts. Like Wonder, he was a child prodigy who grew up in the church singing and playing several instruments, including saxophone, flute, and piano. His family moved to Florida when he was young, and he attended music school at Lee University in Tennessee.

While there, a life-threatening cancer scare drove him to the most important moment of his life, when he performed alongside worship artist Ron Kenoly and received what he could only describe as miracle healing. Since that time, Gallo has dedicated himself to music ministry.

His professional career began in Nashville as a session player, producer, arranger, and engineer working on albums by rising stars in the Christian music community. In 2011, Gallo released his eponymous solo debut, unseating Michael Buble to take the No. 1 spot on the Billboard Smooth Jazz Charts for 11 weeks.

The next year, inspired not only by Wonder's music but his social conscience, Gallo launched Natural Wonder, the ultimate Stevie Wonder experience. Based out of Charlotte, North Carolina, and backed by a cadre of world-class musicians, Natural Wonder brings Wonder's timeless songs to eager audiences across the U.S. and Canada.

From Motown-era hits like "Signed, Sealed, Delivered" and "My Cherie Amour" to 1970s funk classics like "Master Blaster" and "Do I Do," not to mention the compositional brilliance of the Songs in the Key of Life album, Gallo is dedicated to perfecting his repertoire and spreading the gospel of Stevie Wonder.