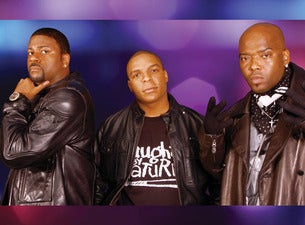 The ‘90s are often described as the Golden Era of hip hop with the decade introducing an array of acts, many of whom have stood the test of time and influenced generations of artists to follow. One such act is the Grammy Award winning hip hop trio, Naughty By Nature, born from the streets of East Orange, New Jersey, or better yet, the streets of ‘’Ill-Town’’.

The trio of Treach (Anthony Criss), Vin Rock (Vincent Brown) and the man responsible for their sound, super producer DJ Kay Gee (Keir Gist) have been a mainstay on world stages for 25 years since hitting the charts with their self titled debut album in 1991, which featured the classic ‘’O.P.P’’. Their follow up, 1993’s, ‘’Nineteen Naughty Three’’ featured the eternal hip hop anthem, ‘’Hip Hop Hooray’’ ensuring that the group would forever be embedded in popular culture. Their hit laden 1995 release, ‘’Poverty’s Paradise’’ featured set favourites, ‘’Craziest’’, ‘”Feel Me Flow’’ and ‘’Clap Yo Hands’’ but it was not until the release of 1999’s ‘’Nineteen Naughty Nine – Natures Fury’’ that the rest of the world caught up with what hip hop fans knew for so long with the album boasting two monster commercial hits in ‘’Holiday’’ and ‘’Jamboree’’. Since then, the group has released two further albums, the 2002 aptly titled ‘’Iicons’’ and 2011’s ‘’Anthem Inc”’ celebrating the groups 20th anniversary.

Hits and anthems aside, the group’s credibility as a hip hop powerhouse comes from their live shows. With constant touring, Naughty By Nature have established a reputation as one of the premier live hip hop groups of all time.

Australia’s love affair with Naughty by Nature commenced in 1995 when the group toured as part of the ‘’Cool Naughty Pain’’ tour with fellow hip hop artists, House of Pain and Coolio. Since that time, the guys have been regular visitors down under having performed shows across every major city and a number of regional towns. From clubs to arenas and festivals, the intensity and energy of a Naughty By Nature show is undeniable. Abstract Entertainment, Arena Touring and Delta Bravo are excited to announce that Treach, Vin Rock and Kay Gee are headed back down under to celebrate 20 years of touring Australia and to kick off their 25th anniversary celebrations. Fans are in for a treat with the shows promising to be nothing short of jam packed, hit laden, ‘’hands in the air’’ hip hop parties, with a few surprises.